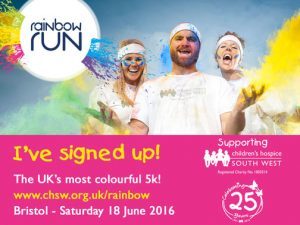 Dewey Waters employees took part in Bristol’s Rainbow Run which took place on Saturday the 18th of June, the Rainbow Run is the most colourful charity event taking place all around the UK.
Sponsors can walk, jog or run your way through the 5k colour explosions to raise money for the Children’s Hospice in the South West.

At the beginning of the year, all the staff at Dewey’s voted for a nominated charity, to support and raise funds throughout 2016. As a team, it was decided upon to raise money for a local charity the Children’s Hospice South West, this dedicated charity provides hospice care for children with life-limited conditions, the charity offers a wide range of care, including respite, short breaks, emergency care, palliative care and end of life care.

The company held a donation week earlier in the year and the first big charity event we took part in was the 5K Rainbow Colour Run.The staff has been collecting donations from the office, factory, family and friends in addition to setting up a Virgin Money Giving site to welcome further donations for this worthwhile cause. 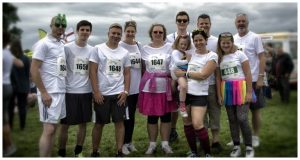 On Saturday 18th June Dewey Water’s enthusiastic fundraising team took part in this charity colour run to raise money for the hospice. The charity donations will be used for hospice care for children with life-limiting conditions and help in assisting their whole family across the South West region.

We are extremely proud to support this fantastic charity and the continuous work that they do, sponsors are now fully collected and the total raised by the team was a total of £618.45. Well done and congratulations to all involved.

Dewey Waters is proud to announce the upcoming launch of a new and innovative range of GRP One-piece tanks. These updated storage solutions further...
Read More

Dewey Waters is pleased to announce that we have raised a total sum of £577.36 for the Children’s Hospice South West. This was achieved...
Read More

Thank you to everyone who contributed to the Halloween Quiz night that took place last week in aid of Children’s Hospice South West. There was a...
Read More

Dewey Waters have participated in their second charity event this year to raise much-needed funds for the Children’s Hospice South-West. The lucky...
Read More

It is with personal regret but warm wishes that we annouce the retirement of Anthony Fernandes, who worked as an installation supervisor for the...
Read More

We are pleased to announce that effective 3rd August 2015, AC Plastics Industries Ltd. will merge with Dewey Waters Ltd. The aim of the merger is to...
Read More

Following on from continued growth of the business and as part of their continual development programme, Dewey Waters is pleased to announce that...
Read More

Dewey Waters offers all of our export customers the opportunity to avail of two training programmes designed specifically to upskill engineers on...
Read More

WISHING CLAIRE ALL THE BEST

Claire Dewfall has been an integral part of the Dewey Waters Sales team since 1994 and after 21 years of service has now retired. Claire will be...
Read More

Dewey Waters is proud to announce the upcoming launch of a new and innovative range of GRP One-piece tanks. These updated storage solutions further enhance the company’s extensive product offerings and solve many of today’s common installation issues. Following the...

END_OF_DOCUMENT_TOKEN_TO_BE_REPLACED

Dewey Waters is pleased to announce that we have raised a total sum of £577.36 for the Children’s Hospice South West. This was achieved through staff fundraising events which ran throughout 2017, these fundraising events included a Halloween quiz night,...

END_OF_DOCUMENT_TOKEN_TO_BE_REPLACED
View all the articles

WORK WITH US ON YOUR NEXT PROJECTS

Get a Quote or Get Advice